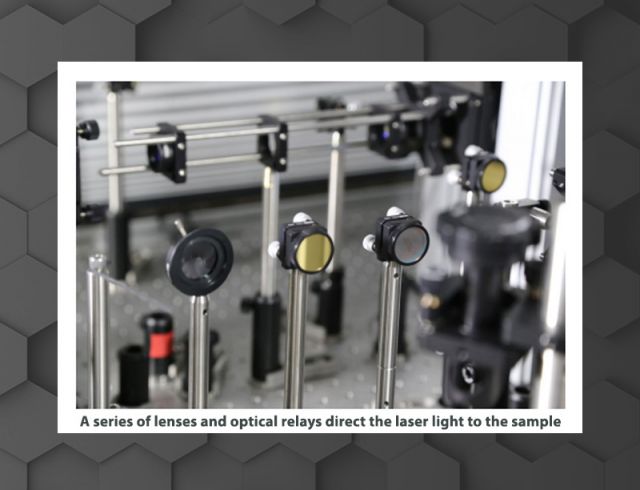 Spencer L. Smith | "Using Two Photons (Instead of One) for a Better View of Brains"

Advancing our understanding of the human brain requires new insights into how neural circuitry works in mammals, including laboratory mice. These investigations require monitoring brain activity with a microscope that provides resolution high enough to see individual neurons and their neighbors. Two-photon (2p) fluorescence microscopy has significantly advanced researchers’ ability to do that, and the lab of Spencer LaVere Smith, an associate professor in the Department of Electrical and Computer Engineering at UC Santa Barbara, is a hub of research related to advancing the technology. As the principal investigator on the five-year, $9 million NSF–funded Next Generation Multiphoton Neuroimaging Consortium (NEMONIC) hub, which was born of President Obama’s BRAIN Initiative and is headquartered at UCSB, Smith says he is working, "to push the frontiers of multiphoton microscopy for neuroscience research." Last fall, in Nature Communications, Smith and his co-authors reported the development of a new microscope they describe as "Dual Independent Enhanced Scan Engines for Large field-of-view Two-Photon imaging(Diesel2p)." This new two-photon microscope provides unprecedented brain-imaging ability. It also has the largest field of view (up to 25 mm2) of any such instrument, allowing it to provide subcellular resolution of multiple areas of the brain in one shot.

"We’re optimizing for three things: resolution, to see individual neurons; field of view, to capture multiple brain regions simultaneously; and imaging speed, to capture changes in neuron activity during behavior," Smith explains. "The events that we’re interested in imaging last less than a second, so we don’t have time to move the microscope; we have to get everything in one shot, while still making sure that the optics can focus ultrafast pulses of laser light."

The powerful lasers that drive 2p imaging systems, each costing about $250,000, deliver ultrafast, ultra-intense pulses of light, each pulse being more than a billion times brighter than sunlight and lasting 0.0001 nanosecond. A single beam, with 80 million pulses per second, is split into two wholly independent scan engine arms, so that the microscope can scan two regions simultaneously, with each configured to different imaging parameters.

In previous iterations of Smith’s instrument, the two lasers were yoked and configured to the same parameters, an arrangement that strongly constrains sampling. Optimal scan parameters, such as frame rate and scan region size, vary across distributed neural circuitry and experimental requirements. The new instrument allows for different scan parameters to be used for each of the two beams. Also incorporating custom designed and custom-manufactured elements, including the optical relays, the scan lens, the tube lens, and the objective lens, the new instrument is already being adopted widely for its ability to provide high-speed imaging of neural activity in widely scattered regions of the brain.

Two-photon microscopy is a specialized type of fluorescence microscopy (FM). To perform such work in Smith’s lab, researchers genetically engineer mice so that their neurons contain a fluorescent indicator of neuron activity. The indicator was made by combining a fluorescent protein from jellyfish and a calcium-binding protein that exists in nature. The approach leverages the fact that a neuron experiences a brief, orders-of magnitude increase in calcium when firing. When the laser is pointed at the neuron, and the neuron is firing, calcium comes in, the protein finds the calcium and, ultimately, fluoresces.

In normal FM, a blue light or other short wavelength light is used to excite the dye, because it has enough energy to raise the target molecule from its normal ground state to its excited state. When the molecule returns to its ground state, fluorescent light is emitted back to the optical system, at which point the image is captured.

The problem with this technique is that the light used to excite the sample has a short wavelength, and short-wavelength light is scattered strongly by brain tissue. Moreover, this light enters the specimen in the shape of a cone, which narrows to the point of focus and expands back out into a cone beyond the focal point. All of the light that is not at the narrowest point is out of focus and shows up as a blurry object or as background superimposed onto the sharply focused region. The fact that fluorescent light is emitted from the entire illuminated cone of the sample, not just from the focus area, is a general problem for fluorescence microscopy.

Two-photon imaging enhances FM by leveraging the quantum behavior of photons and molecules in a way that prevents the generation of a considerable amount of out-of-focus fluorescent light. Whereas normal FM requires only a single high-energy, short wavelength light (e.g., blue), two-photon microscopy uses two lower-energy, longer wavelength (e.g., infrared) photons to do the same thing.

The idea for infrared 2p microscopy is to cause two infrared photons, each having half the energy of a blue photon, to arrive at the same location nearly simultaneously. If both are absorbed within a femtosecond (10-15 of second), such that the molecule cannot, quantum mechanically speaking, distinguish where one photon ends and the next one begins, then the two infrared photons can combine to equal the energy of one blue photon, taking the molecule from the ground state to the excited state and leading to fluorescence. The important advantage of the 2p process is that excitation and, a few nanoseconds later, fluorescence, occur only at a single point where the laser intensity is strong enough to give rise to the near simultaneous absorption of two low-energy infrared photons.

The two-photon microscope does create a linear cone of light, just as single-photon excitation does, but in the 2p process, the intensity of the light outside the plane of focus is too low to cause excitation. The result is that the image captured is made up of only a single sharply focused point of light, eliminating contamination from out-of-focus light.

"The image reveals only light from that plane we’re looking at, without much background signal from above or below the plane," Smith says. "The brain has optical properties like butter; it’s full of lipids and aqueous solutions that make it hard to see through. With normal optical imaging, you can see only the very top of the brain. Two-photon imaging allows us to image deeper down and still attain sub-cellular resolution."

Another advantage of 2p excitation is that the lower-energy, longer-wavelength light employed in it scatters less when passing through tissue, so that it can be sharply focused deeper into tissue. Moreover, the lower-energy, near-infrared light is less damaging to the sample than shorter wavelengths, such as ultraviolet. Smith’s lab tested the device in experiments on mice, observing their brains while they performed tasks such as watching videos or navigating virtual-reality environments. Each mouse has received a glass implant in its skull, providing the microscope with a literal window into its brain.

"I'm motivated by trying to understand the computational principles in neural circuitry that let us do interesting things that we can’t currently replicate in machines," Smith explains. "We can build a machine to do a lot of things better than we can, but for other things, we can’t. We train teenagers to drive cars, but self-driving cars fail in a wide array of situations where humans do not. The systems we use for deep learning are based on insights from the brain, but they are only a few insights, and not the whole story. They work pretty well, but are still fragile. By comparison, I can put a mouse in a room where it has never been, and it will run to someplace where I can’t reach it. It won’t run into any walls. It does this super-reliably and runs on about a watt of power. There are interesting computational principles that we cannot yet replicate in human-made machines that exist in the brains of mice, and I want to start to uncover that. It’s why I wanted to build this microscope."

Smith is committed to ensuring open access to the instrument, and long before this paper was published, he and his co-authors released a preprint that included the engineering details needed to replicate it. They also shared the technology with colleagues at Boston University, where researchers in Dr. Jerry Chen’s lab made modifications to suit their own experiments. "This is exciting," Smith says. "They didn’t have to start from scratch like we did. They could build off of our work. Jerry’s paper was published back-to-back with ours, and two companies, INSS and CoSys, have sold systems based on our designs. Since there is no patent, and won’t be, this technology is free for all to use and modify however they see fit."