Profs. John Bowers & Luke Theogarajan team up with engineers to reduce the size, cost and power requirements of an optical frequency device 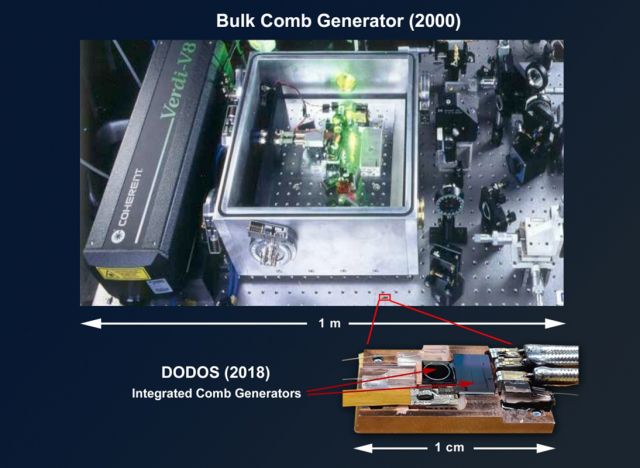 ECE Professors Bowers and Theogarajan and four UCSB GSRs produce significant advances in chip-based integrated photonics and nonlinear optics that enable miniature, energy-efficient components for an optical synthesizer – with their findings appearing in the journal Nature.

Only a few decades ago, finding a particular channel on the radio or television meant dialing a knob by hand and then making small adjustments to home in on the right signal. That’s no longer the case, thanks to something called a radio-frequency synthesizer, which generates accurate signal frequencies.

“We took something that occupied a whole optical bench, weighed 50 pounds and used a kilowatt of power and made it orders of magnitude more efficient by integrating the key elements onto silicon photonic integrated circuits,” said Bowers, UCSB’s Fred Kavli Chair in Nanotechnology and director of the campus’s Institute for Energy Efficiency.