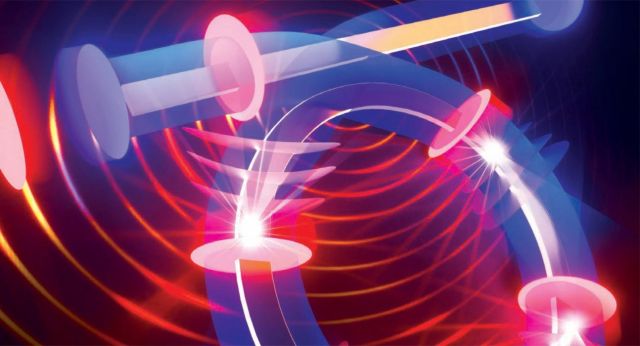 In the cover article of the January 2019 issue of Nature Photonics, UCSB researchers and their collaborators at Honeywell, Yale, and Northern Arizona University describe a significant milestone in this pursuit

Spectrally pure lasers lie at the heart of precision high-end scientific and commercial applications, thanks to their ability to produce near-perfect single color light. A laser’s capacity to produce such light is measured in terms of its linewidth, or coherence, which is the ability to emit a constant frequency over a certain period of time before the frequency changes.

Researchers go to great lengths to build highly coherent, near-single-frequency lasers for high-end systems, such as atomic clocks. Today, however, because these lasers are large and occupy racks full of equipment, they are relegated to bench tops in the laboratory, limiting their application.

The challenge is to move the performance of high-end lasers onto photonic micro-chips, dramatically reducing cost and size while making the technology available to a wide range of applications including spectroscopy, navigation, quantum computation, and optical communications. Achieving such performance at the chip scale would also go a long way toward addressing the challenge posed by the Internet’s exploding data-capacity requirements and the resulting increase in world-wide energy consumption of data centers and their fiber-optic interconnects.

In the Nature article the researchers describe the milestone of a chip scale laser capable of emitting light with a fundamental linewidth of less than 1 Hz — quiet enough to move demanding scientific applications to the chip scale.

To be impactful, these low-linewidth lasers must be incorporated into photonic integrated circuits (PICs) — the equivalents of computer micro-chips for light — that can be fabricated at wafer-scale in commercial micro-chip foundries. “To date, there hasn’t been a method for making a quiet laser with this level of coherence and narrow linewidth at the photonic-chip scale,” says co-author and team lead Dan Blumenthal , professor in the Department of Electrical and Computer Engineering at UC Santa Barbara. The current generation of chip-scale lasers are inherently noisy and have relatively large linewidth. New innovations have been needed that function within the fundamental physics associated with miniaturizing these high-quality lasers.