Prof. Sanjit Mitra among those to earn fellow status 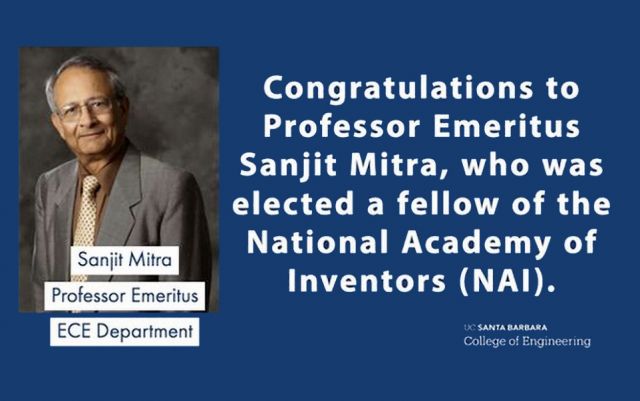 The NAI Fellows Program highlights academic inventors who have demonstrated a spirit of innovation in creating or facilitating outstanding inventions that have made a tangible impact on quality of life, economic development and the welfare of society. Election to NAI Fellow is the highest professional distinction accorded solely to academic inventors.

“We offer sincere congratulations to Professor Michael Chabinyc and Professor Sanjit Mitra on their election to the National Academy of Inventors, a well-deserved and prestigious peer recognition of their innovation and important contributions to society with leading-edge research,” said Rod Alferness, dean of the College of Engineering.

Mitra has published more than 700 papers in the areas of analog and digital signal processing, and image processing. He has spent more than 40 years at UC Santa Barbara after joining the faculty in 1977, has authored and co-authored twelve books, and holds six patents.

“I am honored to be elected a fellow of the National Academy of Inventors,” Mitra said. “This recognition by my peers is particularly gratifying as the inventions which had the biggest impact are based on my initial research carried out at UC Santa Barbara in collaboration with visiting researchers from industry.”

Previously, Mitra was elected a fellow by the Institute of Electrical and Electronics Engineers, the American Association for the Advancement of Science, and the International Society for Optical Engineering. He is a member of the U.S. National Academy of Engineering and of several foreign academies.

To date, NAI Fellows hold more than 41,500 issued U.S. patents, which have generated over 11,000 licensed technologies and companies, and created more than 36 million jobs. In addition, over $1.6 trillion in revenue has been generated based on NAI Fellow discoveries.

“Congratulations to the 2019 class of NAI Fellows,” said Laura A. Peter, Deputy Under Secretary of Commerce for Intellectual Property and Deputy Director at the U.S. Patent and Trademark Office. “It is a privilege to welcome these exceptionally qualified individuals to this prestigious organization. I am certain their accomplishments will inspire the next generation of invention pioneers.”

Fellows will be formally inducted during the 2020 NAI Fellows Ceremony on April 10, 2020, in Phoenix, Arizona.