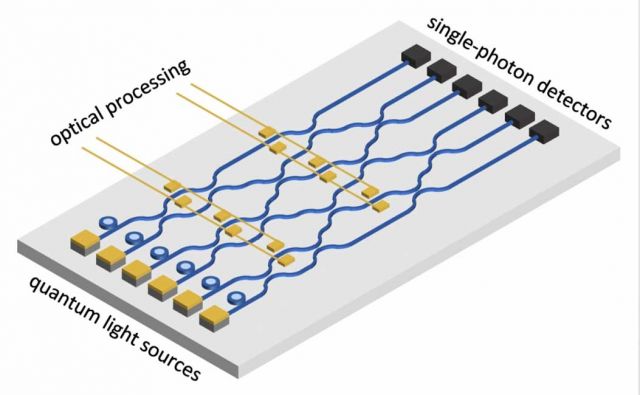 Quantum computers use the fundamentals of quantum mechanics to potentially speed up the process of solving complex computations. Suppose you need to perform the task of searching for a specific number in a phone book. A classical computer will search each line of the phone book until it finds a match. A quantum computer could search the entire phone book at the same time by assessing each line simultaneously and return a result much faster.

The difference in speed is due to the computer’s basic unit for processing information. In a classical computer, that basic unit is called a bit, an electrical or optical pulse that represents either 0 or 1. A quantum computer’s basic unit is a qubit, which can represent numerous combinations of values from 0 and 1 at the same time. It is this characteristic that may allow quantum computers to speed up calculations. The downside of qubits is that they exist in a fragile quantum state that is vulnerable to environmental noise, such as changes in temperature. As a result, generating and managing qubits in a controlled environment poses significant challenges for researchers.

Galan Moody, an assistant professor of electrical and computer engineering, has proposed a solution to overcome the poor efficiency and performance of existing quantum computing prototypes that use light to encode and process information. Optical systems are attractive because they naturally link quantum computing and networking in the same physical framework. However, existing technology still requires off-chip optical operations, which dramatically reduce efficiency, performance and scalability. In his project, “Heterogeneous III-V/Silicon Photonics for All-on-Chip: Linear Optical Quantum Computing,” Moody aims to create an optical quantum computing platform in which all of the essential components are integrated onto a single semiconductor chip.

Moody is one of 40 early-career scientists selected for a 2019 Young Investigator Award from the Air Force Office of Scientific Research. Winners receive $450,000 over three years to support their work. The program is intended to foster research by young scientists that supports the Air Force’s mission to control and maximize utilization of air, space and cyberspace, as well as related challenges in science and engineering.