ECE Ass't. Prof. Kerem Camsari receives the award for contributions to the theory and practice of low barrier nanomagnets for probabilistic computing 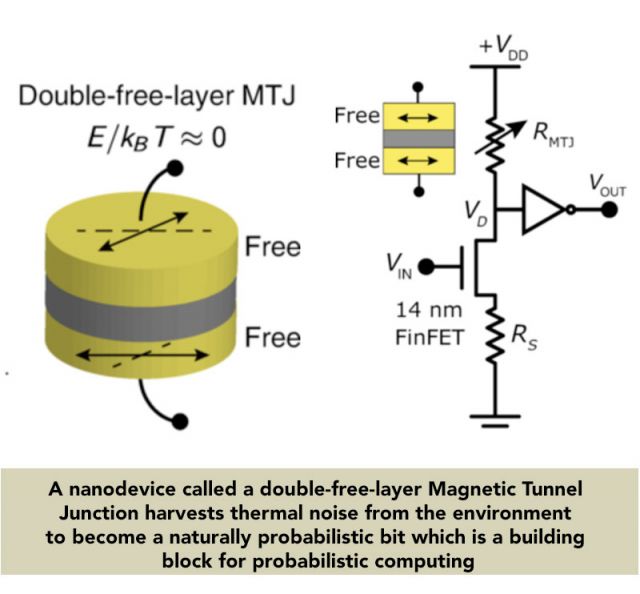 The IEEE Magnetics Society Career Award was established to better support researchers in the early period of their career and it recognizes Camsari's research work in applied magnetism:

Virtually all applications of magnets rely on their non-volatility or memory, the ability of a magnet to retain its magnetization for prolonged amounts of time. In the past 5 years or so, we showed how bad magnets – useless for memory applications — can be used as efficient building blocks for probabilistic computing. These tasks include optimization, drug discovery, logistics, machine learning and many others. More generally, many problems of modern artificial intelligence and even near-term quantum computing are shared by probabilistic computing.

Camsari's Orchestrating Physics for Unconventional Systems Lab (OPUS) has a Physics-to-Systems focus that aims to exploit unique features of novel materials and phenomena to design and experimentally prototype efficient electronic circuits and architectures. In this sense, this award recognizes the lab's general approach of taking something from physics (intrinsic randomness of volatile magnets) and use it in the service of solving computational tasks more efficiently.

Camsari received his PhD in ECE from Purdue University in 2015, where he continued on as a post-doctoral researcher between 2015 and 2020, before joining the department of Electrical and Computer Engineering in UC Santa Barbara in 2020. His work has been published in many refereed journals and conferences including Nature, Nature Electronics, Science Advances and Physical Review X.

The award will be given at INTERMAG21's Virtual Conference on Wednesday, April 28th at the IEEE Magnetics Society Award Ceremony.