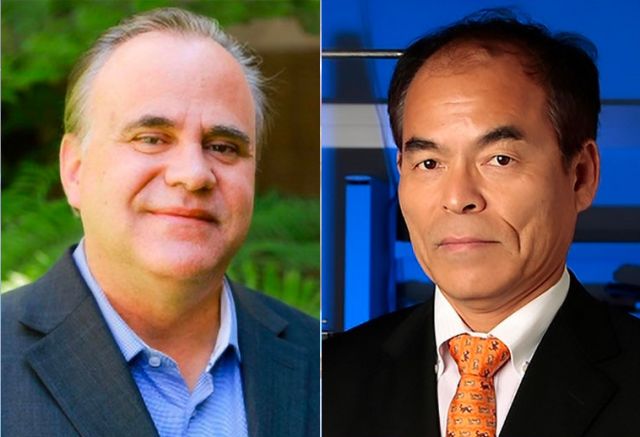 Steven DenBaars and Shuji Nakamura, UC Santa Barbara professors of materials and of electrical and computer engineering, have been selected as this year’s recipients of the Spirit of Innovation award, a business community celebration of local inventors, their accomplishments and entrepreneurship.

“It really is an honor to recognize Shuji Nakamura and Steve DenBaars,” said Henry Dubroff, founder and editor of the PCBT, which hosts the awards. “They have been on our short list since we started the Central Coast Innovation Awards six years ago.” Travel schedules always got in the way, he added, “so you could say we are taking the opportunity this year of having a remote event to honor them.”

The Spirit of Innovation awards, one of several to be awarded at PCBT’s Central Coast Innovation Awards, he said, is their version of “a capstone award to true innovators with world-class standing.”

DenBaars stated, “We are both so honored to receive this award, which is the result of the many innovative efforts of the faculty, student and staff of the UC Santa Barbara’s Solid State Lighting & Energy Electronics Center.”

DenBaars and Nakamura, who co-direct UC Santa Barbara’s Solid State Lighting & Energy Electronics Center, were lauded for their work with gallium nitride-based LED lighting. It’s a technology that has unlocked solid-state lighting’s unprecedented energy efficiency and performance in a variety of applications across the globe, from phone screens to big displays, as well as indoor, outdoor and automotive lighting.

Nakamura, known best for his Nobel Prize-winning invention of the highly sought bright-blue LED, joined the UCSB faculty in 2000. He came at the suggestion of DenBaars, who in addition to his work at UCSB, had co-founded Nitres, Inc., (acquired by Cree, Inc. in 2000) a developer of nitride-based semiconductor devices, and one of the first in a tradition of successful tech startups to spin off from UCSB.

The two would continue to pair their scientific and engineering expertise with their business acumen and launch other startups while their work generated new technologies and consumer products, from Blu-ray players to brighter headlights, to the wildly popular vintage-look LED filament bulbs. Notably the pair co-founded SLD Laser in 2013, along with James Raring (a UCSB alum), and Paul Rudy, which was recently acquired by Kyocera Corporation. Recent efforts have investigated the development of LED lights in the UV-C range, a technology that could efficiently and effectively rid surfaces of the SARS-CoV-2 virus. They hold more than 500 patents between them.

Nakamura and DenBaars will be honored at a virtual Central Coast Innovation Awards event on March 25, following a virtual Startup Village which showcases young and emerging companies and talented entrepreneurs from the San Luis Obispo, Santa Barbara and Ventura counties.