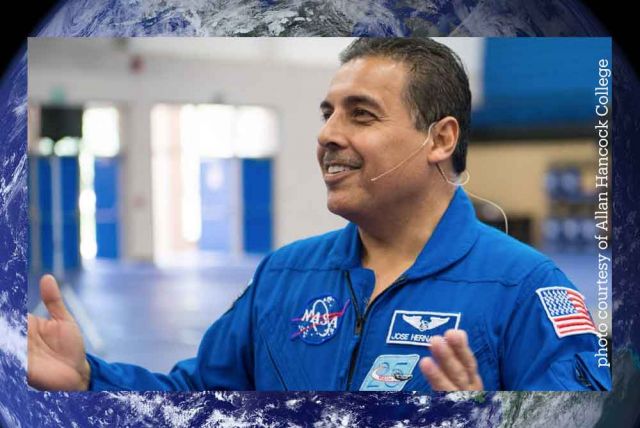 The story of former NASA astronaut José Hernández, a graduate of UC Santa Barbara’s Electrical and Computer Engineering Department who went from California’s migrant farmworker community to orbiting the Earth, will be the subject of a Netflix original movie set to begin production this summer. The working title of the film is “A Million Miles Away.”

Hernández spent fourteen days in space in 2009 as a flight engineer on board STS-128, a NASA Space Shuttle mission
to the International Space Station (ISS). But his flight path to space, where he became the first person to send a tweet in Spanish from space, was not easy.

“The film shows my life as a migrant farmer who went from working in the fields with his parents to becoming an astronaut,” said Hernández, who described his nomadic childhood of moving each year with his family to various locations throughout California and Mexico. “I think this film is going to inspire a lot of people, not just kids, to believe that anything is possible if you put your mind to it.”

Hernández said that a few years ago he was approached by Select Films, a production company that had produced such hit films as Secretariat, The Rookie, and McFarland, USA, the last of which highlights a high school cross-country team that won a state championship.

“I had been approached by film companies before, but Select Films had a proven track record of telling feel-good motivational stories,” said Hernández, adding that he and Select Films pitched their idea to six studios in a two-day period. “Four of the studios wanted to pick it up. We went with Netflix, because we felt it would be viewed by a larger audience.”

The movie will tell the story of how his second-grade teacher convinced his parents to stay in one place to provide stability for their children. It continues by depicting his life as a teenager growing up in Stockton, including the pivotal moment in 1976 when he was inspired to become an astronaut, watching Gene Cernan walk on the moon during the Apollo 17 mission. The film will also portray his struggles while majoring in engineering at the University of the Pacific.

“A movie always has to have a villain. The villain in this case is not a person; it’s the self-doubt and inner struggle of believing in myself,” said Hernández. “A lot of minority children suffer from impostor syndrome (see article on page 30), feeling they don’t belong and aren’t as competent as they should be while they start to succeed. The film addresses this head on, so hopefully people will see it and be able to better deal with their own struggles and rejection.”

Hernández knows all about rejection. He was turned down eleven times by NASA’s astronaut program, finally getting accepted on his twelfth attempt, in May 2004.

“I would always convince myself it’s not a bad consolation prize to be where I am, and I’d think about all the things I had accomplished. It helped me realize that I belonged,” recalled Hernández. “My dream of becoming an astronaut motivated me to get an engineering degree from Pacific and a graduate degree from UCSB. It motivated me to work at a premier research facility like the Lawrence Livermore National Laboratory, get a job that I love that paid me well, become a pilot and a scuba diver, and learn a third language, Russian.”

Hernández hopes the film will feature a few scenes shot on the UCSB campus, where he earned a master’s degree in electrical and computer engineering in 1986. He describes his time at UCSB as pivotal.

“Because I had received a Graduate Engineering Minority Fellowship, for the first time, I didn’t have to work. I could focus solely on my studies and work with the great professors, like Sanjit Mitra in digital signal processing,” said Hernández, whose daughter, Marisol, graduated from UCSB last June with a BA in statistics and data. “UCSB prepared me very well for my job at the Lawrence Livermore National Laboratory. I am certain that without that training from UCSB, there is no way I would have become an astronaut.”

While working at the Lawrence Livermore National Laboratory, Hernández co-developed the first full-field digital mammography imaging system for early detection of breast cancer. He left in 2004, when he was selected for astronaut training.