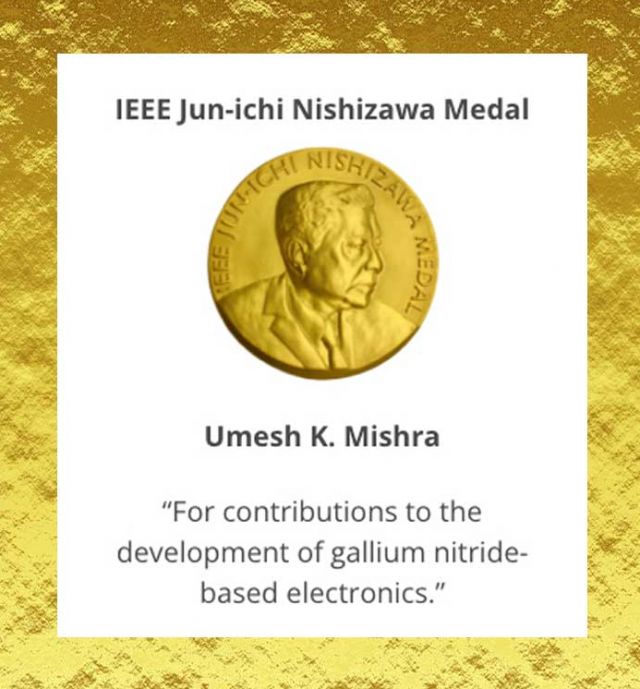 Electrical and computer engineering professor Umesh Mishra recalls a Saturday afternoon in 1994 when his colleague at UCSB, Steven DenBaars, now a distinguished professor in the Departments of Materials and Electrical and Computer Engineering (ECE), asked him to come to his office.

“He showed me an article in a Japanese trade magazine that featured a blue light-emitting diode (LED) with a brightness of 1 candela that was developed by a scientist named Shuji Nakamura in Japan,” he explains. “At that instant, Steve and I knew the world had changed, and we decided to switch our research programs to gallium nitride (GaN), with my emphasis being on electronics.”

Fast forward nearly twenty-eight years; the landscapes at UCSB and the world, for that matter, have changed significantly since that discussion. Mishra’s work remains focused primarily on the development of GaN materials and devices for electronics while contributing to opto-electronics by working on the electronic properties of LEDs and micro-LEDs. Nakamura, now a materials professor at UCSB, received the 2014 Nobel Prize in Physics for the invention of the efficient blue LED, which has enabled bright, energy-saving white light sources. The university is also home to the Solid State Lighting & Energy Electronics Center (SSLEEC), a world-renowned interdisciplinary center where industry partners, student researchers, and faculty collaborate to advance solid-state lighting and energy-efficient power switching using wide-bandgap semiconductors. Under the leadership of Nakamura, DenBaars, Mishra, and materials professor James Speck, SSLEEC has pioneered GaN-based technologies, producing nearly two hundred patents over the past six years.

“Under sustained funding from the Office of Naval Research (ONR) and the Defense Advanced Research Projects Agency, we developed GaN technology for the world’s first microwave power transistors and advanced them to a level that now forms the backbone of the infrastructure of 5G, and eventually 6G and beyond, which speaks to the longevity of our work and GaN,” said Mishra.

“Enhancing power-conversion efficiency saves more than $40 billion annually or the equivalent of over three hundred coal-fired power plants,” Mishra says. “The beneficial impact of efficient GaN electronics on the climate is significant. I am hopeful that as GaN electronics become more mainstream, the true benefit to society through the connectivity provided by 5G/6G and the efficiencies in power conversion will continuously grow.”

In recognition of his “contributions to the development of gallium-based electronics,” the IEEE Board of Directors selected Mishra to receive the 2022 Jun-ichi Nishizawa Medal, an honor awarded annually to one individual who is in the fields of materials science and device technologies. Nishizawa, considered to be the father of Japanese microelectronics, contributed important innovations in the fields of optical communications and semiconductor devices.

“I am both humbled and honored to receive the Jun-ichi Nishizawa Medal. He was a pioneer and a major contributor to the development of bright red double-heterostructure LED,” said Mishra, who is also an elected member of the National Academy of Engineering and a fellow of the IEEE and the National Academy of Inventors. “On a personal level, this award gives me a platform to publicly express my thanks. I am indebted to my colleagues at UCSB, past and present, who helped create the world-leading nitride semiconductor activity and eco-system at UCSB.”

“What the award means to me professionally is that working in a nurturing and collaborative environment with colleagues who want to change the world leads to amazing outcomes, and that it isn’t easy; it takes decades,” said Mishra. “I truly believe this success could happen only at UCSB.”