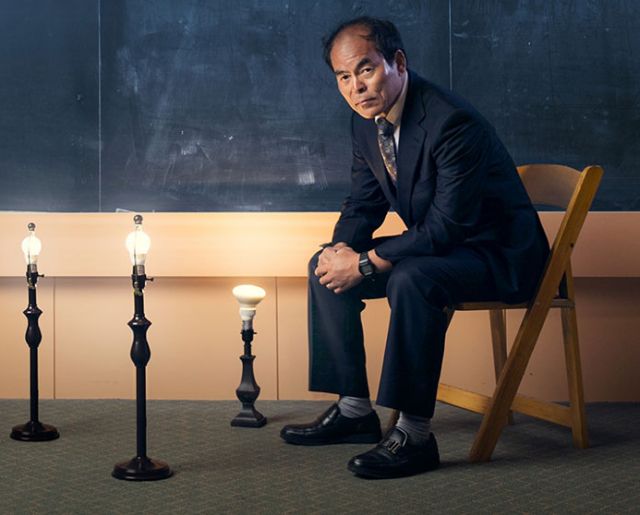 It’s the late 1980s and Shuji Nakamura is on to something. Working in a corporate lab, the Japanese engineer is convinced that if the conditions were just right in his metal organic chemical vapor deposition machine, he might be able to grow the high-quality gallium nitride (GaN) crystals that could make possible the highly sought blue LED. His days are a succession of trials and errors.

“When I was modifying reactors every morning and every afternoon continuously for a year and a half, I never thought it would be so successful,” said Nakamura, now a professor of materials and of electrical and computer engineering at UC Santa Barbara.

‘Successful’ is something of an understatement. With his flawless GaN crystals, Nakamura not only developed the bright-blue LED, he helped pave the way for the white LED, a technology that has revolutionized our lighting and displays. Invention of the blue LED earned Nakamura and colleagues the 2014 Nobel Prize in Physics, and the solid-state lighting technology continues to surprise us today with new applications and new possibilities.

It is for these impacts that Nakamura has been chosen, along with fellow LED pioneers, for the 2021 Queen Elizabeth Prize for Engineering (QEPrize). Presented this year “for the creation and development of LED lighting, which forms the basis of all solid-state lighting and technology,” the prize is awarded also to Isamu Akasaki, Nick Holonyak, Jr., M. George Craford and Russell Dupuis — all major players in the development of LED lighting. According to the QEPrize Foundation, this year’s winners are recognized “not only for the global impact of LED and solid-state lighting but also for the tremendous contribution the technology has made, and will continue to make, to reducing energy consumption and addressing climate change.”

“Our campus is overjoyed that Professor Nakamura, along with four other colleagues, has received this international prize that is among the top engineering awards in the world, recognizing their transformational innovation that is of monumental benefit to humankind,” said UC Santa Barbara Chancellor Henry T. Yang. “Their invention of visible LEDs has enabled energy-efficient solid state lighting, which is the largest improvement in lighting efficiency in more than 100 years. LED-based solid state illumination is now widely deployed, and realizing huge energy savings; reducing greenhouse gases that are impacting climate change; and helping to create sustainable lighting for the developing world. The richness of consequences has also extended to applications in horticulture, automotive lighting, micro-LED displays and healthcare, including the use of ultra-violet LEDs to sterilize COVID-19. These once inconceivable technologies have been made possible through the groundbreaking materials science from Professor Nakamura and his colleagues, with more to come.”

“I am so honored to receive the Queen Elizabeth Prize for my contributions to solid-state lighting, which provides tremendous benefits for humanity by providing energy-efficient lighting and displays,” Nakamura said.

The UCSB Current – "A Richness of Consequences" (full article)