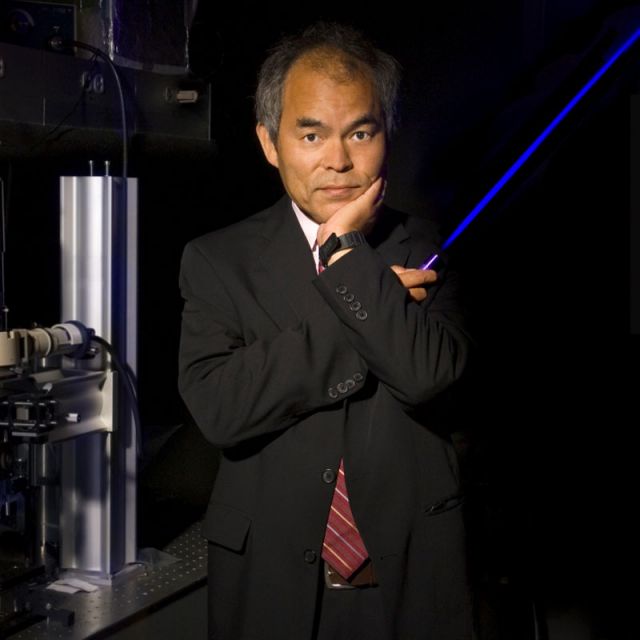 The award from ASME was established in 2019, the award recognizes “pioneering contributions to the frontiers of energy, leading to breakthroughs in existing technology, leading to new applications or new areas of engineering endeavor, or leading to policy initiatives.”

Nakamura, a professor in the departments of electrical and computer engineering, and of materials at UC Santa Barbara, was selected for “transformational innovation in energy-conserving electronic and photonic materials, particularly pioneering work in light emitters based on wide-bandgap semiconductors and the invention of efficient blue-light emitting diodes that have rendered substantive bright and energy-saving white light sources.”

“It is my great honor the receive the Richard J. Goldstein Energy Lecture Award,” Nakamura said. “LEDs have been used in applications in a variety of lighting and displays in order to reduce energy consumption. Laser lighting would be the next generation of lighting by utilizing blue lasers. I hope that the invention of LEDs and laser lighting will contribute to minimizing global warming in the future.”

“On behalf of the College of Engineering, I offer sincere congratulations to Shuji Nakamura for receiving the 2021 ASME Richard J. Goldstein Energy Lecture Award,” said Interim Dean Tresa Pollock. “We continue to take tremendous pride in being able to call Shuji our friend and UCSB colleague. As this award clearly underscores, his tenacity in pursuing the world-changing blue LED continues to serve as an inspiration to us all.”

Nakamura received a bronze medal and a certificate, and gave a lecture on the topic of the invention of the blue LED and the future of lighting at the virtual ASME International Mechanical Engineering Congress & Exposition that took place Nov. 1-4, 2021.

When the bright blue LED was invented around the early 1990s, it was a game-changer. For decades, scientists and engineers around the world had been working hard to develop the blue light emitting diode, which was a necessary step toward the development of energy efficient, solid-state white lighting. Nakamura was among the first to overcome that challenge, with a novel system that greatly improved the quality of gallium nitride (GaN) crystals that are the foundation of his bright blue LEDs. Prior to his Two-Flow Metalorganic Chemical Vapor Deposition (MOCVD) technique, GaN had been considered too difficult to work with despite its potential, because the crystals were prone to flaws in their growth.

Nakamura’s work indeed has paved the way for highly energy-efficient, durable and versatile lighting that has found its way into homes, businesses, displays, automobiles and more. His work has earned him numerous honors and accolades, including the 2006 Millennium Technology Prize, the 2014 Nobel Prize in Physics, a 2015 Global Energy Prize and the 2021 Queen Elizabeth Prize for Engineering. Nakamura, who joined the UC Santa Barbara faculty in 2000, is a fellow of the National Academy of Engineering, of the National Academy of Inventors and of the Royal Academy of Engineering.

The UCSB Current – "The Frontier of Energy" (full article)