COVID Contributions: UCSB electrical & computer engineering and materials researchers work on semiconductors that could transform how we disinfect surfaces, personal protective equipment — even the air we breathe 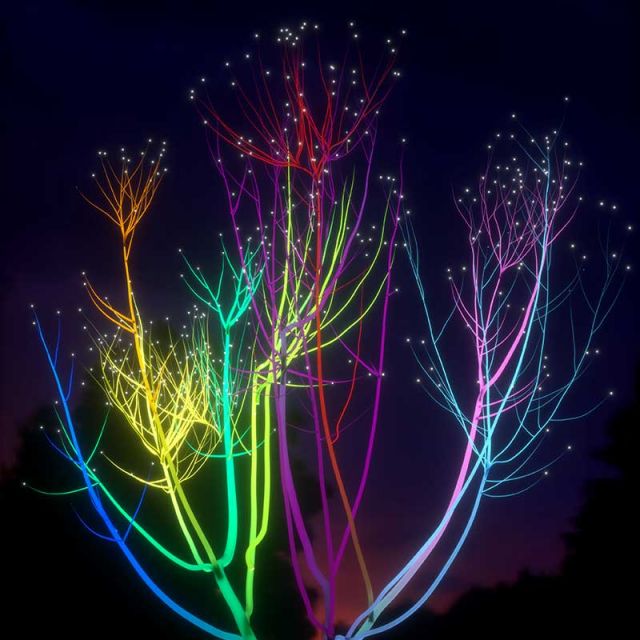 "The Pathway to UV Lights that Can Destroy Viruses"

The COVID-19 outbreak has brought into sharp focus the need to be able to sanitize surfaces, personal protective equipment needed by front-line health workers, and even the air we breathe in shared closed spaces, such as ships and airplanes.

UV lights — those emitting in the very short, ultraviolet, wave- lengths — are a promising tool for this purpose. Already, some jails and prisons are using robots topped by a bank of UV lights to decontaminate cells and shared spaces, such as dining halls. UV light damages human skin and eyes, though, so the rooms are emptied before the robots go through, sanitizing everything in them.

For the past twenty years, the Solid State Lighting and Energy Electronics Center (SSLEEC) in the UC Santa Barbara College of Engineering has been a world leader in developing ever-more-powerful and energy-efficient solid-state LED lighting. For about fifteen years, smaller SSLEEC research efforts have been directed at developing LEDs emitting in the ultraviolet wavelengths of 200-280 nanometers (UVC), primarily with an eye on water purification in areas of the world lacking water-treatment infrastructure. UVC lights have been used for decades by municipal water plants, because they destroy the DNA of many microbes, rendering drinking water safe.

While the Sun sends ultraviolet light in the form of UVA and UVB, the best UV light for purifying air and water and for inactivating microbes — UVC — can be generated on Earth only via man-made processes. Until recently, UVC decontamination systems have been enabled not by LEDs, but by mercury-vapor lamps. Among them is the SteriPEN, a water-purification device used by backpackers. If the glass in the SteriPEN breaks, mercury is released, rendering the device useless.

“One big drawback to using mercury lamps for disinfection of enclosed spaces is that they require a lot of voltage to operate, which is difficult to achieve for a portable device should it need to run on battery backup during a power outage,” says ECE Prof. Steve DenBaars, SSLEEC co-director and the Mitsubishi Distinguished Professor. “But LEDs, which are small, non-toxic, run on little power, and are essentially shatter-proof, can go everywhere. You could even imagine having a UV LED on your cellphone to decontaminate it if someone else touches it.”

When, in March, UCSB laboratories ramped down in response to the outbreak, exceptions were made for what was deemed essential research. SSLEEC’s UV projects qualified and not only continued, but expanded. “Pre-COVID, we had one [PhD] student working on it; now we have five,” Denbaars notes. “With COVID, we shifted people from the white-LED projects to the UV LED projects.”

A preview of a study that was published in the September issue of the journal Emerging Infectious Diseases compared four methods for decontaminating N95 respirators: treating them with UV light, with heat (150 degrees Fahrenheit), with a 70-percent ethanol solution, and with vaporized hydrogen peroxide (VHP).

VHP and ethanol had the highest rate of inactivation of SARS- CoV-2, which causes COVID-19; however, after two rounds of usage, the VHP- and ethanol-treated masks showed marked drops in filtration performance. The heat-treated masks constantly underperformed compared to the UV-treated masks and did not function effectively after two decontaminations.

Further, says Chris Zollner, who is completing his fourth year as a PhD student in the SSLEEC, “In this study, the researchers placed the mask far from the UV LED, resulting in a low ‘dose’ of UV radiation, so they needed a lot of time to get UV disinfection to work well. I suspect that, had they placed the LED closer to the mask, it would have been disinfected much more quickly.”

At their current efficiency and power, UVC LEDs are able to decontaminate masks without damaging them, and as power and efficiency increase, Denbaars notes, he expects to see sanitization times come down to a few seconds of exposure.

Denbaars says that the COVID-19 pandemic has ignited the conversation around UV LED research funding: “Government people are calling us now and asking what it will take to get UV LEDs to be really efficient.”