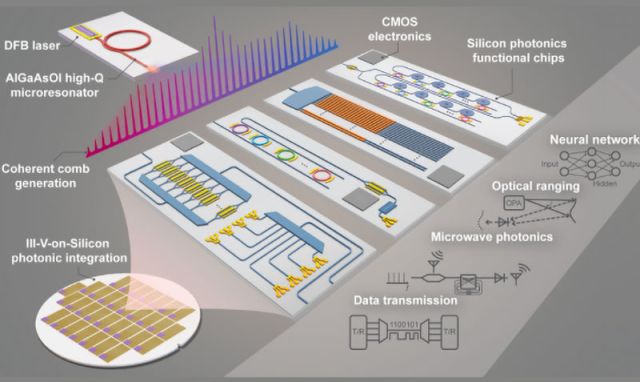 From The UCSB Current "The Cadence of Electronics Innovation"

For several years, UCSB professor John Bowers, who is the Fred Kavli Chair in Nanotechnology and director of the UC Santa Barbara’s Institute for Energy Efficiency, has worked with the groups of Kerry Vahala at Caltech and Tobias Kippenberg at the Swiss Federal Institute of Technology (EPFL) on a project within the Defense Advanced Research Projects Agency (DARPA) Direct On-Chip Digital Optical Synthesizer (DODOS) program. Together, as reported last year in the COE’s Convergence magazine, the teams developed the first commercially scalable integrated on-chip semiconductor laser and resonator capable of producing a laser microcomb. Created by the coupled laser and resonator, a microcomb is series of equally spaced, low-noise, highly stable laser lines, each capable of carrying data, that dramatically increases the capacity and efficiency of large integrated circuits. A paper titled “Laser soliton microcombs heterogeneously integrated on silicon,” published in Science in June 2021, described the achievement.

Now, nearly a year later, an article in the May 19 issue of Nature describes what Bowers says is “validation” of the integrated laser-resonator technology described in last year’s Science article. “This paper is about bridging the integrated comb technology we developed earlier and PIC [photonic integrated circuit] technology for transmitting and receiving very-high-capacity data streams,” he says.  The authors, led by Prof. Wang at Peking University in Beijing, China, plus Bowers and researchers in his lab, describe what they call “the first integrated chip-scale microcomb-based photonic data link.” Bowers sees it as an important step in reaching the next milestone in the convergence of photonics and electronics.

By way of background, Bowers explains that for some time now, long-distance data transmission over the internet has been achieved via fiber optics, which makes it possible to move very large amounts of data over long distances with very low loss and using very little power. Previously, the interface between photonics and electronics has been at the edge of a circuit board, but now, says Bowers, “It is inside the package.” This is because electronic chips are rapidly growing in terms of the amount of data being sent to and from them. Current state-of-the-art chips have input-output capacity of up to 51 terabits per second (Tbps), which is 5,000 times the 10 Gbps capacity of a modern desktop computer. “You have 5,000 times the amount of data going off an advanced switching chip as you have coming out of your computer processor,” according to Lin Chang, a researcher in Bowers group. “The only way to move that much data is to do it optically, so optics are now inside that switch package.”

He adds that, to move so much data requires either many lasers, which is not practical given that lasers are comparatively large and must be tightly controlled, or a different technology. Laser-comb technology allows a single laser to drive hundreds of wavelengths via a microcomb, with each wavelength able to carry data. “That’s where the world is going,” Chang says.

That continued expansion of integrated-circuit complexity and capability is not stopping and is, essentially, codified within the global electronics industry, which helps companies to budget time and resources to arrive at established milestones on time. “It’s a straight line [of development] and everybody plans for that. That’s their cadence,” Bowers explains. “The switch industry was at 3.2, then 6.4, 12.5, and 25.6 Tbps; now, we’re at 51 Tbps, and in two years, we’ll be at 102 Tbps. So, you will have to have twice the capacity in just two years and four times as much in four years. That’s why the scalability of the laser-resonator technology is so important.”

As chip performance has steadily increased, the transistor count on a chip, Bowers notes, has gone from about one thousand in 1970, to one hundred million in 2000, to ten billion now, an evolution made possible by the continuous miniaturization of the transistors themselves, the smallest of which are now 5 nanometers (nm) across. “In moving from 45 nm to 5 nm, however, electronics didn’t get significantly faster. “That’s why you need to go more in parallel,” he says, referring to the dramatically capacity-expanding laser-comb technology. “The laser-comb technology provides a promising way for industry to adhere to its cadence, and the data-link system described in the Nature paper demonstrates that promise is being delivered.”

The UCSB Current "The Cadence of Electronics Innovation"