Research.com lists UCSB ECE Professors S. DenBaars, J. Bowers, U. Mishra, A. Teel, P. Kokotovic and L. Coldren among the top Electronics and Electrical Engineering scientists in the world and also ranks UCSB at 6th out of 139 U.S. universities in E & EE and 8th among 644 universities in the world 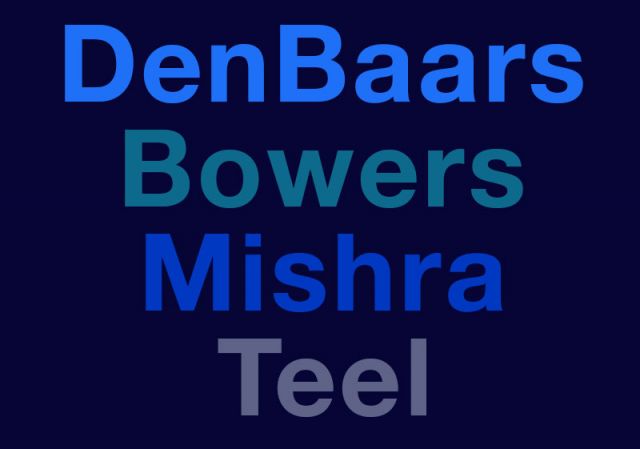 The academic platform’s eighth edition listing top scientists is based on a thorough examination of more than 4,832 scientists on Google Scholar and Microsoft Academic Graph.  The rankings contain h-index, publications, and citations values collected last December. The h-index is calculated by counting the number of publications for which an author has been cited by other authors at least that number of times. For example, an h-index of 80 means that the scientist has published at least 80 papers that have each been cited at least 80 times. The figure is intended to represent both a scientist’s productivity and impact.

DenBaars, a Distinguished Professor of materials and electrical and computer engineering (ECE), had an H-index of 120, and was credited with 883 publications and 52,320 citations. DenBaars has helped pioneer the field of solid-state lighting, establishing and improving gallium nitride (GaN) materials and devices used for lighting and displays. His specific research interests include growth of wide-bandgap semiconductors (GaN based) and their application to blue light-emitting diodes (LEDs) and lasers, and high-power electronic devices. An elected member of the National Academy of Engineering (NAE) and a fellow of the National Academy of Inventors (NAI) and the Institute of Electrical and Electronics Engineers (IEEE), DenBaars also  co-directs the Solid-State Lighting and Energy Electronics Center (SSLEEC) at UCSB.

Bowers, the Kavli Chair of Nanotechnology and director of the college’s Institute for Energy Efficiency, is a world leader in photonics and optoelectronics. According to research.com, the professor of materials and ECE had an H-index of 112, wrote 1,231 publications, and received 47,479 citations. Bowers’s research focuses on the use of light to transmit data. As a result of his work to integrate electronic and photonic elements on a single silicon-based chip, the next generation of computers and telecommunications devices will be able to receive and transmit data at much faster speeds while using a fraction of the energy that computers use today. Bowers is an elected member of NAE, a fellow of IEEE, NAI, the Optical Society of America, and the American Physical Society.

Mishra, had an H-index of 99, with 616 publications and 39,377 citations. A member of NAE and an NAI and IEEE fellow, his research focuses primarily on the development of GaN materials and devices for electronics, while contributing to opto-electronics by working on the electronic properties of LEDs and micro-LEDs. Mishra is also a leader of SSLEEC, where he and DenBaars, Nobel Laureate Shuji Nakamura, and James Speck, have pioneered GaN-based technologies, producing nearly two hundred patents over the past six years.

Another current ECE faculty member, Andrew Teel, was ranked 71st in the nation and 130 in the world.  He had an H-index of 82, and was credited with 388 publications and 31,924 citations. Teel is currently the director of the Center for Control, Dynamical systems, and Computation and his research interests are in nonlinear and hybrid dynamical systems, with a focus on stability  analysis and control design. He has received NSF Research Initiation and CAREER Awards, the 1998 IEEE Leon K. Kirchmayer Prize Paper Award, the 1998 George S. Axelby Outstanding Paper Award, and was the recipient of the first SIAM Control and Systems Theory Prize in 1998.

Among COE faculty, three others ranked among the top 80 in the nation. Robert McMeeking, the Tony Evans Distinguished Professor of Materials and Mechanical Engineering, ranked 41st in the nation and 72nd in the world in mechanical engineering. In the electronics and electrical engineering field, Petar Kokotovic, a professor emeritus in the ECE Department, ranked 43rd in the U.S., and Professor Emeritus Larry Coldren placed 76th.

UCSB also ranked 29th in the nation and 45th in the world in computer science out of nearly 950 universities worldwide, including 192 in the United States.