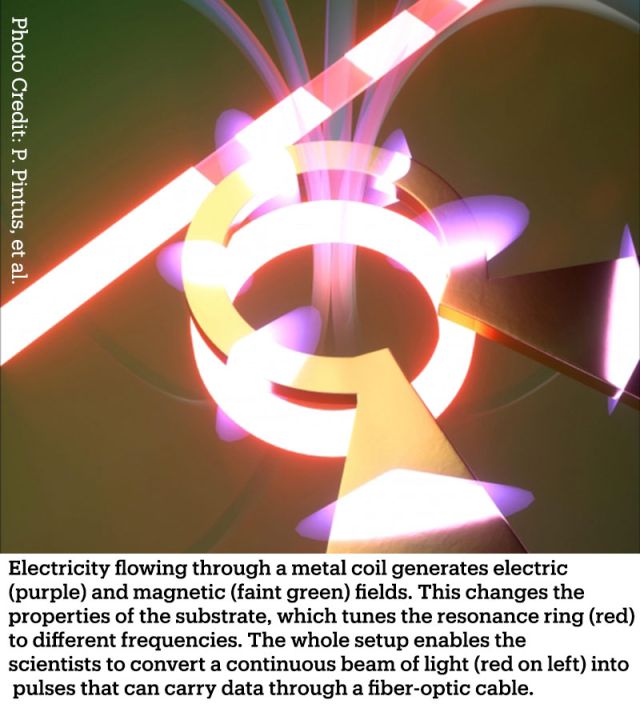 Many state-of-the-art technologies work at incredibly low temperatures. Superconducting microprocessors and quantum computers promise to revolutionize computation, but scientists need to keep them just above absolute zero (-459.67° Fahrenheit) to protect their delicate states. Still, ultra-cold components have to interface with room temperature systems, providing both a challenge and an opportunity for engineers.

An international team of scientists, led by UC Santa Barbara’s Paolo Pintus, has designed a device to help cryogenic computers talk with their fair-weather counterparts. The mechanism uses a magnetic field to convert data from electrical current to pulses of light. The light can then travel via fiber-optic cables, which can transmit more information than regular electrical cables while minimizing the heat that leaks into the cryogenic system. The team’s results appear in the journal Nature Electronics.

“A device like this could enable seamless integration with cutting-edge technologies based on superconductors, for example,” said Pintus, a project scientist in UC Santa Barbara’s Optoelectronics Research Group. Superconductors can carry electrical current without any energy loss, but typically require temperatures below -450° Fahrenheit to work properly.

Right now, cryogenic systems use standard metal wires to connect with room-temperature electronics. Unfortunately, these wires transfer heat into the cold circuits and can only transmit a small amount of data at a time.

Pintus and his collaborators wanted to address both these issues at once. “The solution is using light in an optical fiber to transfer information instead of using electrons in a metal cable,” he said.

Fiber optics are standard in modern telecommunications. These thin glass cables carry information as pulses of light far faster than metal wires can carry electrical charges. As a result, fiberoptic cables can relay 1,000 times more data than conventional wires over the same time span. And glass is a good insulator, meaning it will transfer far less heat to the cryogenic components than a metal wire.

However, using fiber optics requires an extra step: converting data from electrical signals into optical signals using a modulator. This is a routine process at ambient conditions, but becomes a bit tricky at cryogenic temperatures. 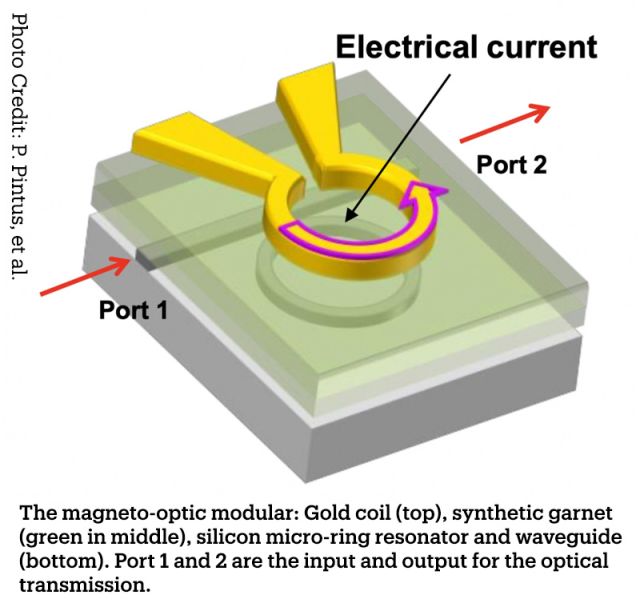 Pintus and his collaborators built a device that translates electrical input into pulses of light. An electric current creates a magnetic field that changes the optical properties of a synthetic garnet. Scientists refer to this as the “magneto-optic effect.”

The magnetic field changes the garnet’s refractive index, essentially its “density” to light. By changing this property, Pintus can tune the amplitude of the light that circulates in a micro-ring resonator and interacts with the garnet. This creates bright and dark pulses that carry information through the fiberoptic cable like Morse code in a telegraph wire.

“This is the first high-speed modulator ever fabricated using the magneto-optic effect,” Pintus remarked.

Other researchers have created modulators using capacitor-like devices and electric fields. However, these modulators usually have high electrical impedance — they resist the flow of alternating current — making them a poor match for superconductors, which have essentially zero electrical impedance. Since the magneto-optic modulator has low impedance, the scientists hope it will be able to better interface with superconductor circuits.

The team also took steps to make their modulator as practical as possible. It operates at wavelengths of 1,550 nanometers, the same wavelength of light used in internet telecommunications. It was produced using standard methods, which simplifies its manufacturing.

The project, funded by the Air Force Office of Scientific Research, was a collaborative effort. Pintus and group director John Bowers at UC Santa Barbara led the project, from conception, modelling and design through fabrication and testing. The synthetic garnet was grown and characterized by a group of researchers from the Tokyo Institute of Technology who have collaborated with the team at UCSB’s Department of Electrical and Computer Engineering on several research projects in the past.

Another partner, the Quantum Computing and Engineering group of BBN Raytheon, develops the kinds of superconducting circuits that could benefit from the new technology. Their collaboration with UCSB is a longstanding one. Scientists at BBN performed the low-temperature testing of the device to verify its performance in a realistic superconducting computing environment.

The device’s bandwidth is around 2 gigabits per second. It’s not a lot compared to data links at room temperature, but Pintus said it’s promising for a first demonstration. The team also needs to make the device more efficient for it to become useful in practical applications. However, they believe they can achieve this by replacing the garnet with a better material. “We would like to investigate other materials,” he added, “and we think we can achieve a higher bitrate. For instance, europium-based materials show a magneto-optic effect 300 times larger than the garnet.”

There are plenty of materials to choose from, but not a lot of information to help Pintus and his colleagues make that choice. Scientists have studied the magneto-optic properties of only a few materials at low temperatures.

“The promising results demonstrated in this work could pave the way for a new class of energy efficient cryogenic devices,” Pintus said, “leading the research toward high-performing (unexplored) magneto-optic materials that can operate at low temperatures.”

The UCSB Current "The Magneto-Optic Modulator"