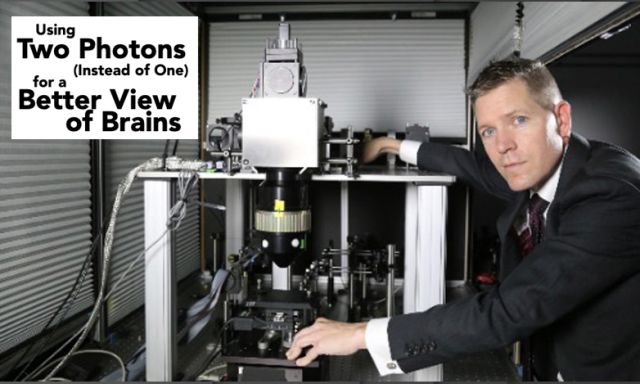 Advancing our understanding of the human brain requires new insights into how neural circuitry works in mammals, including laboratory mice. These investigations require monitoring brain activity with a microscope that provides resolution high enough to see individual neurons and their neighbors. Two-photon (2p) fluorescence microscopy has significantly advanced researchers’ ability to do that, and the lab of Spencer LaVere Smith, an associate professor in the Department of Electrical and Computer Engineering at UC Santa Barbara, is a hub of research related to advancing the technology. As the principal investigator on the five-year, $9 million NSF–funded Next Generation Multiphoton Neuroimaging Consortium (NEMONIC) hub, which was born of President Obama’s BRAIN Initiative and is headquartered at UCSB, Smith says he is working, "to push the frontiers of multiphoton microscopy for neuroscience research." Last fall, in Nature Communications, Smith and his co-authors reported the development of a new microscope they describe as "Dual Independent Enhanced Scan Engines for Large field-of-view Two-Photon imaging(Diesel2p)." This new two-photon microscope provides unprecedented brain-imaging ability. It also has the largest field of view (up to 25 mm2) of any such instrument, allowing it to provide subcellular resolution of multiple areas of the brain in one shot.

"We’re optimizing for three things: resolution, to see individual neurons; field of view, to capture multiple brain regions simultaneously; and imaging speed, to capture changes in neuron activity during behavior," Smith explains. "The events that we’re interested in imaging last less than a second, so we don’t have time to move the microscope; we have to get everything in one shot, while still making sure that the optics can focus ultrafast pulses of laser light."

The powerful lasers that drive 2p imaging systems, each costing about $250,000, deliver ultrafast, ultra-intense pulses of light, each pulse being more than a billion times brighter than sunlight and lasting 0.0001 nanosecond. A single beam, with 80 million pulses per second, is split into two wholly independent scan engine arms, so that the microscope can scan two regions simultaneously, with each configured to different imaging parameters.

In previous iterations of Smith’s instrument, the two lasers were yoked and configured to the same parameters, an arrangement that strongly constrains sampling. Optimal scan parameters, such as frame rate and scan region size, vary across distributed neural circuitry and experimental requirements. The new instrument allows for different scan parameters to be used for each of the two beams. Also incorporating custom designed and custom-manufactured elements, including the optical relays, the scan lens, the tube lens, and the objective lens, the new instrument is already being adopted widely for its ability to provide high-speed imaging of neural activity in widely scattered regions of the brain.

Two-photon microscopy is a specialized type of fluorescence microscopy (FM). To perform such work in Smith’s lab, researchers genetically engineer mice so that their neurons contain a fluorescent indicator of neuron activity. The indicator was made by combining a fluorescent protein from jellyfish and a calcium-binding protein that exists in nature. The approach leverages the fact that a neuron experiences a brief, orders-of magnitude increase in calcium when firing. When the laser is pointed at the neuron, and the neuron is firing, calcium comes in, the protein finds the calcium and, ultimately, fluoresces.