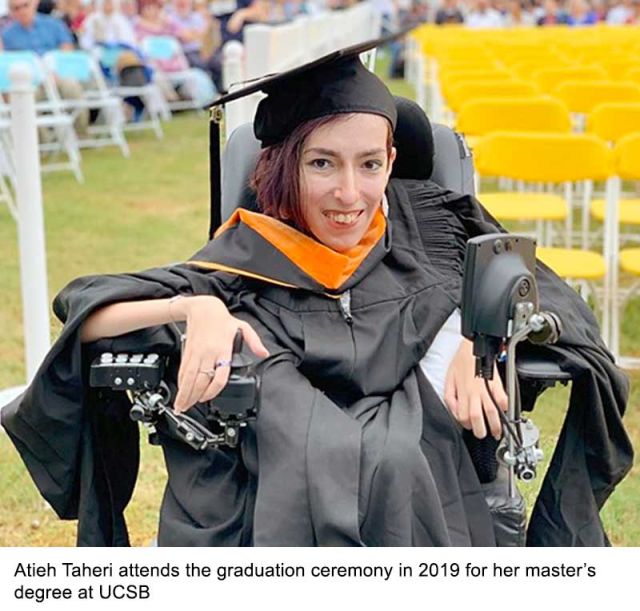 When she was 18 months old, she was diagnosed with spinal muscular atrophy. But Ms. Taheri not only has lived much longer than her physicians expected, she is a doctoral student studying computer engineering at UCSB.

And now she's using her studies to help others with SMA or similar diseases to integrate smoothly into society.

Ms. Taheri talked to the News-Press about SMA during August, which is Spinal Muscular Atrophy Awareness Month.

"My mom was always saying that when I was born she could see differences between me and other children," said Ms. Taheri, who is under the supervision of Professor Misha Sra in the Perceptual Engineering Lab at UCSB. "I couldn't put pressure on my feet, like other children do when they learn to walk"

So her mother took her to the doctor.

When she was around a year and a half old, "my doctor told my mom to take me to a neurologist to see what was happening because I couldn’t walk. I was weak. My mom could see differences between me and my older sister when she was my age," said Ms. Taheri.

Doctors told her mother that Ms. Taheri would probably not survive, "I wouldn’t live beyond a year or a year and a half."

At about 18 months old, Ms. Taheri had a muscle biopsy, which diagnosed her with SMA.

Doctors assumed because of her disease that Ms. Taheri would not live very long. "When I was 10 years old, my mom was asked by a doctor ‘Why are you bothering? Let her live her life, she isn’t going to live much longer than two or three years,'" said Ms. Taheri.

Her mom was told twice by doctors that she wouldn’t survive.

"When I was 16 years old, I got pneumonia. I was hospitalized," but she eventually recovered.

"I survived and I got out of it. Doctors can be wrong. We shouldn’t lose our hope," said Ms. Taheri. 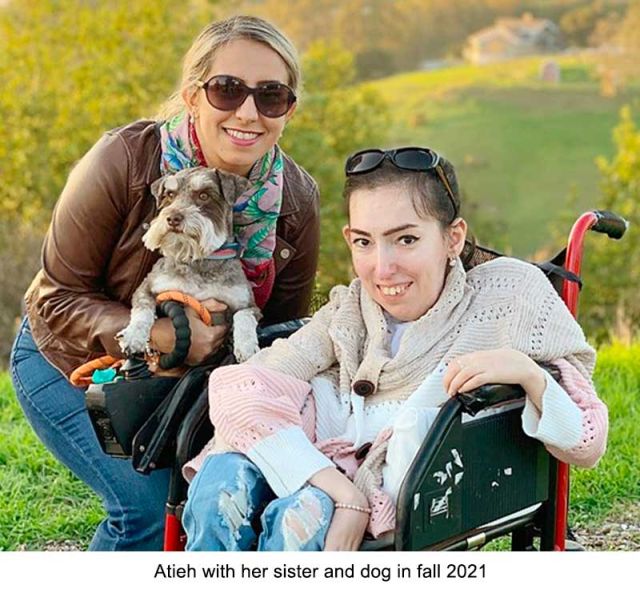 Ms. Taheri graduated from Sharif University of Technology, located in Iran, with a bachelor’s of science degree in computer engineering, in 2011.

When she was at Sharif University, she received genetic testing that diagnosed her with SMA 2. (There are four types of SMA. SMA 1 is the most severe type of, and SMA 4 is the least severe.)

After earning her bachelor’s degree, Ms. Taheri came to UCSB, where she earned her master’s in electrical and computer engineering in 2019. Ms. Taheri also interned for Apple Inc. during the summers of 2016 and 2017.

On Aug. 1, Ms. Taheri began her internship with Google. “I’m so excited about it!” she said.

Ms. Taheri’s current research as a UCSB doctoral student is broadly focused on how to help people with SMA or similar diseases smoothly integrate into society.

“I wanted to use my research knowledge to help people like me,” she said. “An idea came to my mind. When I was 15, I really enjoyed playing video games, but I eventually lost my ability to hold a game controller. I couldn’t play games anymore, which I really liked. I loved it. I wanted to find a way for myself and people in my situation to be able to play games and do things that I couldn’t do anymore.”

The answer came to her.

“Why not use facial expressions to control something like a video game controller?” asked. Ms. Taheri.

According to her website, “my research seeks to develop better ways for computer interaction to increase computer accessibility; specifically by learning more about experiences that people with motor impairments have, to identify their strengths and limitations, and to explore innovative techniques to enhance their quality of life and to broaden inclusion.”

Up until six years ago, there were no approved treatments for SMA.

Evrysdi (risdiplam) is a prescription medicine used to treat SMA in adults and children.

And, determined to succeed, she is continuing her efforts to help others.

The Santa Barbara News-Press "Determined to Succeed" by Katherine Zehnder