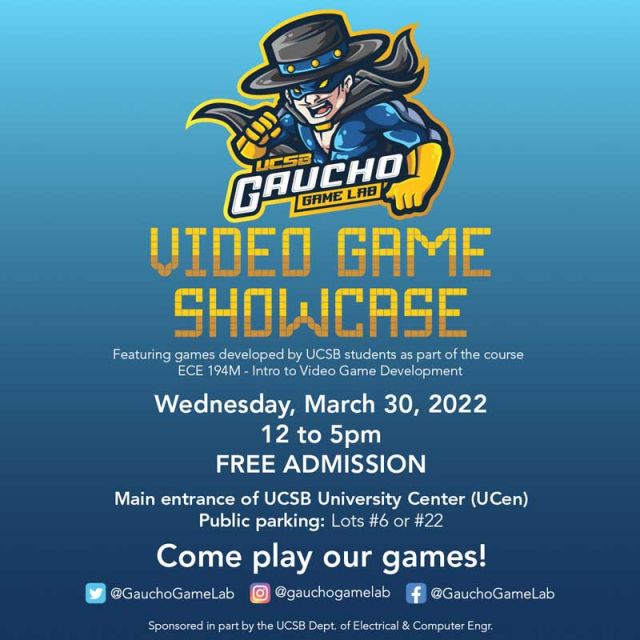 From The UCSB Current article "More than Fun and Games"

When UC Santa Barbara undergrad Qiru Hu visited Beijing not too long ago, she found herself fascinated with a robot. A somewhat subpar robot.

“It was this huge sweeping robot,” said the third-year electrical and computer engineering student. “It was navigating along the roads, sweeping the streets and collecting trash.”

As gamely as it worked to accomplish this noble task, however, it wasn’t as good as it could be. “I actually saw it clean a street, but it wasn’t advanced to the point that it could replace human workers,” she said.

The experience generated some interesting questions: What should an effective street sweeping automaton be able to do on a busy metropolitan street, full of cars and people? What could it do with the trash it collects?

Those questions became the inspiration for Hu’s video game, “MOMO RecycleBot 2022,” in which the player controls — you guessed it — a sweeping robot. Using their keyboards, players can direct their robot around obstacles, avoid people and sweep up trash. Not only do they get the completist satisfaction of a clean city street onscreen, they also get points for successfully executing what has become a necessary — though still underrated — real-life skill.

“It also educates the player in distinguishing between recyclable and non-recyclable trash,” she said.

Hu’s game is one of more than a dozen that she and her colleagues in engineering professor Pradeep Sen’s class demonstrated at UCSB’s first-ever video game open house, from noon to 5 p.m. Wednesday, March 30, in front of the University Center. The event was free and open to the public, and visitors of all ages were encouraged to come and play the games.

“We’re going to set up maybe 10 computers or so, each playing different games that were developed in our introductory game development course, and the public can come by and play,” Sen said.

Some games, like Hu’s, have a casual flavor, while others have players racing, or laying enemies low with swords.

“I have folks working on role-playing games and collaborative multiplayer games. We’ve got one where you’re a dragon flying around,” added Sen, whose expertise lies in the area of computer graphics.

However, don’t expect Assassin’s Creed or Red Dead Redemption-level gameplay, Sen said; after all, this is an introductory course. This showcase is all about students discovering their nascent software development powers, and is the beginning of a video game development program called the UCSB Gaucho Game Lab.

Still, prepare to be impressed.

“The reason I’m so excited about video games is that it’s a great way for students to learn how to develop real-world software,” Sen said. To that end, his students drive the course by choosing their game mechanics, their graphics and, with the Unity cross-platform engine, strive to bring their games to life. Along the way they discuss gameplay and story, play each other’s games, provide feedback and continue to tweak their own games.

“The entire process of building a game from scratch is great fun for me,” said Hu, who this summer will intern with Meta with an eye toward working with augmented reality games. “Play testing is also fun — I saw a lot of bugs when I play tested my game,” she added, as her trash robot rolled through buildings and fell off platforms. “It was very funny.”

Hu’s recycling robot game is the first in a series of novel, environmentally conscious games that expose players to concepts such as climate change, recycling and renewable energy to be released under UCSB Gaucho Game Lab’s Go Green Initiative.

“The hope is to make some games every year as part of this initiative,” Sen said. “It’s a way UCSB can fill an important need because there unfortunately isn’t much high-end quality content in that space.”

More than fun and games, however, the course helps to provide an entry into the often closed world of video game and software development.

“The idea is to build a program that essentially solves the chicken-and-egg problem: If you want to get into game development you need experience to get a job…and you need a job to get experience,” Sen said. Gleaning experience through his course in developing their own games, students can start building their portfolios and venture out into the professional world with an edge. The video game industry is huge, larger than movies and music combined, with billions of gamers across the world. Tech giants such as Google and Meta are tapping into this market with offerings of more — and more immersive — games.

Sen is also hoping to tap into the universal appeal of video games and their pandemic-proof ability to bring together people regardless of age, gender and ethnicity. As the program grows, the number of games will increase and their quality will improve.

“By having such a program, it gives a unique way for the public to engage with UCSB,” said Sen, who plans to put the games under development onto the Gaucho Game Lab platform for wide release. “And, it’s a cool way for us to have a connection with the community, not just locally but worldwide.”

The UCSB Current "More than Fun and Games"