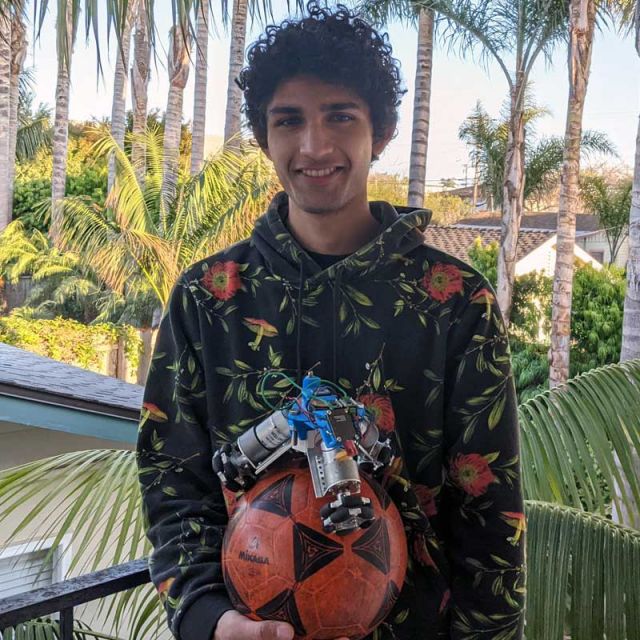 In his own words – interviewed Spring Quarter 2021

Why EE as a major? Electrical engineering is like magic. It enables us to store, transmit, and process information and energy by moving electrons rather than atoms and molecules. We can hear someone's voice without their presence, transmit energy without movement, make music without instruments, compute without gears, record information without type. Electrical engineering enables such fine control and fidelity over so many things in the world. For the last couple of years of grade school, I was fascinated by electric motors, computers, renewable energy, electronic music, so EE was a logical choice. By the way, rock n' roll, hip hop, and EDM exist because of electrical engineering!

Why did you select UCSB's EE program? I heard about a cool project happening here, UCSB Hyperloop, and was instantly hooked. In combination with that, the ECE department here is very well reputed, and has a high student-to-faculty ratio. When I visited, I really liked the campus and its people.

How did you hear about UCSB's EE program? My mom read about EE at UCSB and found the department and the university intriguing.

Prospective students and parents often ask, what can you do with an EE degree? I would say, there's not much you can't. Some of the core fields in EE are robotics, control systems, signal processing, electronics, embedded systems, power transmission, computer architecture, materials, micromachines (MEMS), and semiconductors. Many of these fields are on the cutting edge of all of engineering. So an EE could work on exciting technologies like self driving cars, processors for AI, self aware power grids, solar panels and wind turbines, neural interfaces, deep learning and vision, rockets, drones, computers, headphones, microwaves, and much more. EEs are in an excellent position to do research, make inventions, and start companies!

What have you learned that has surprised you the most so far? Perhaps this should not be surprising, but there is never an end to depth in any given topic. It has been astounding to drill deeper into certain areas I thought I knew pretty well, realize I barely knew much at all, and repeat that multiple times. It is a never ending process. Many of these classes are really just introductions to vast and expansive fields. That isn't necessarily to say inaccessible, scary, or difficult. Just expansive. They are like colorful painted caves with many pathways, and the student is like an explorer. You shine your flashlight around in the cave, and if you don't look hard enough it can seem like the paintings in your chamber are all there is. But look closely, and there are inevitably pathways to other painted caverns. And the process repeats.

What has your experience been like taking the Math and Physics core classes? They are very important background courses, but because they are presented more or less without context, it was sometimes difficult to "get" the point. Looking back, differential equations and linear algebra are of ultimate importance in many fields of electrical engineering since they allow us to describe and manipulate the physical relationships we work with. Electromagnetism is central in the devices and electronics side of EE. And mechanics features heavily when studying robot dynamics. Regardless, the introductory upper division EE classes often review or reteach the requisite math or physics concepts. And there were many times when a math or physics concept clicked in my head when I was chewing on an electrical engineering topic.

What has been your most challenging but rewarding course? That course would have to be ECE 137A, the first transistor electronics course. It was the first and one of the only classes where we were forced to go into the lab on our own time and build actual working products - a linear amplifier, differential amplifier, and an operational amplifier. These are transistor circuit structures found in many actual electronics products. Building these circuits required time, persistence, physical and conceptual dexterity. It required not just a good understanding of the base theory (mathematical and physical models of how the devices and circuits work), but a solid understanding of how physical devices deviate from theory. And that second part came from experimentation, hearsay, or asking pointy questions. The class has a midterm and final, but building and testing the circuits was what mattered. It was grueling at times, but an absolute adventure.

Are there any specific classes that you are looking forward to? As I'm entering my last quarter of college, I'm looking forward to focusing all my effort on my Senior Capstone Project (188ABC). We're trying to fly an ionic wind aircraft, and are starting to integrate together all the subsystems that make up the aircraft - the airframe, power converter, batteries, thrusters, and launcher. Flight testing and hopefully flying the aircraft will be really exciting.

Talk about your Capstone Project experience so far: I've had a great time with the EE capstone sequence. Capstone gives students the freedom to take on projects of their choice, with the right amount of guidance that they need. Capstone is one of the best things about the EE major at UCSB, and I've actually participated in three of them (student organizations listed above). Capstone projects can be industry sponsored, lab sponsored, or student initiated. You can pick (or start) a project and work on it with your friends and classmates. For some projects, the team is given requirements and asked to execute, and for others, the team decides on both the requirements and the execution. In our case, we proposed the ionic wind aircraft project about six months before the beginning of our senior year and worked with the faculty advisors to come up with deliverables for the project. Our EE faculty advisor (who is amazing), helped us find all the funding we needed, as well as the right subject matter experts for our subsystems. During the year, we would work on the project as a team, set our own deadlines, and give weekly progress updates to TAs and advisors who guided us along. There are also introductions, design reviews, and project pitches distributed across the year to hone your presentation skills. Overall, it is a very well managed program and an awesome experience.

What area do you want to specialize in? I'm most interested in the fields of robotics & control systems, embedded systems, analog electronics, and power electronics. If I were to pick one, I would go for robotics & control systems, but going through the EE program has exposed me to so much that I never knew existed! I enjoy delving into concepts required for the project I am working on at a given time, in order to develop a handle over a range of topics.

Preparation from High School to College

What prepared you the most for studying engineering in college? I was into electronics, electric motors, renewable energy, computers, cars, trains, and just machines in general. Since engineering is about building the best machines possible, being curious and interested in how machines work was an important part of my preparation. Besides that, taking AP Physics C, AP Calculus BC, and AP Computer Science helped me form an important analytic base that I still carry with me today.

Are there any classes that you suggest ECE students take before entering UCSB: I strongly suggest and recommend taking AP Physics C, AP Calculus BC, and AP Computer Science. They are year long courses that give you some fundamental tools in engineering, years before you encounter them in university. Taking physics and calculus together helped me understand the intimate relationship between physics and calculus which is often understated. Understanding the concepts of calculus allow a buildup into differential equations, which is one of the keys to many parts of electrical engineering. I also learned many of my programming fundamentals from AP Computer Science, and for computer engineering students, that will be the most important preparatory class.

Any additional experiences that you would like to share with students to help them prepare for college? I did a lot of personal projects during high school, which I consider an important part of my development in engineering. Having an idea, planning out a project, and executing it is a valuable skill that can be practiced at any time. Looking back, they were conceptually rudimentary and didn't require much theoretical understanding, but that's what you'll get in university. Find concepts and ideas that inspire you, and do as many projects as you can!

What is campus life like for EE students? About the same as for most other students, but as the years go by you will increasingly gravitate towards Harold Frank Hall or the Engineering Science Building (ESB), where many of the labs are.

What is the social scene like on campus, in Isla Vista and off-campus like for ECE students? Since UCSB is a mid to large sized research university, there's never a lack of fun sights and experiences (during normal times at least). There's a great underground music scene in IV, mainly consisting of jazz and rock bands. There are many water sports to enjoy, like surfing, paddle-boarding, and kayaking. The Santa Ynez mountains have some excellent trails, and there are always parties and social events going on in IV.

Describe your housing experience frosh to present: My first year I lived in San Miguel, where I met my core college friend group. Freshman dorm life was extremely fun since there were many people buzzing about and it was easy to spend time hanging out since classes weren't too hard. Freshman year is a great time to take advantage of the social scene on campus. For sophomore year I moved to Manzanita Village, which consists of a bunch of small buildings, and is a lot quieter. The venue is modern and beautiful, situated right off the ocean and served by Carrillo, which I consider to be the best dining common. My third year I moved to San Joaquin, which is a university apartment on the other side of IV from campus. It was even quieter than Manzanita, but fairly spacious. And it was a very long ride from campus. My fourth year (all during coronavirus) I've lived in IV. I'd say the reputation among students of each of these places is about right, so it shouldn't be too hard to make a judgment of where to live. Most of the freshman dorms are about the same, but towers are a bit more concentrated with people. Manzanita and San Joaquin are quiet but very modern, clean, and relatively spacious. Isla Vista is the diametrical opposite of my description of Manzanita and San Joaquin.

What are your “big picture” plans/aspirations after graduation? I'd love to become an entrepreneur, to start and run a company. It has always been a dream of mine because the process combines creative freedom with the need for utter practicality. The last hundred years of synthetic material production have not caught up with the reality that we must "de-produce" everything we make if we want to live without being surrounded by incorruptible plastic and electronic garbage. In those last hundred years, we have also tapped into a seemingly infinite source of energy called oil, which has helped us to permanently alter our climate and ecosystems and start reaping the consequences. And in the last 20 years of social media, we've seen a rise of ideological feedback loops that prevent critical thinking and criticism. I'm very invested in these issues and want to help solve them, whether through engineering, entrepreneurship, or even politics. Right now I'm participating in UCSB's Technology Management Program (TMP) – New Venture Competition (NVC) for an infinity flight solar drone that optimizes agriculture, and hope to turn that into a company! In general, I'm interested in various technical fields, like sustainable transportation, closed loop manufacturing, electronics, alternative energy, robotics, and aerospace. I am also attracted to the idea of doing a PhD in any of those fields.