Convergence "The Evolution of ..."

Thirty years ago, UCSB inventors had no clear path for taking ideas to the marketplace. Now they do. Here’s how it happened. 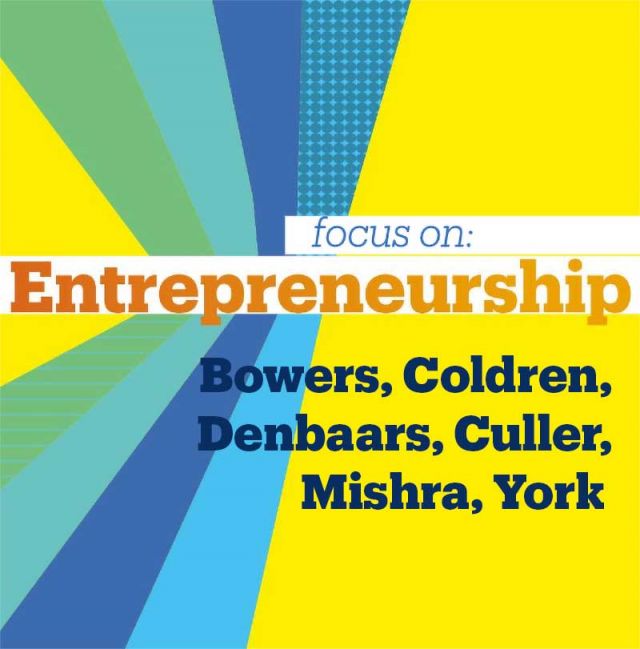 "The Evolution of Entrepreneurship"

There is no definitive starting point for entrepreneurship at UC Santa Barbara, no place or time that can be identified as “the beginning.” It simply occurred and then, over time, evolved, much in the manner of a startup. “Entrepreneurship at UCSB is really an organic story,” says Bob York, a professor in the College of Engineering’s (COE’s) Electrical and Computer Engineering Department and currently dean of Professional and Continuing Education at UCSB, who was a key architect of the Technology Management Program (TMP), now home to programmatic support for entrepreneurship.

Entrepreneurial activity was occurring at UCSB at least as early as the 1960s, when mathematician and electrical engineering professor Glen Culler played a key role in the university’s becoming one of the four original nodes of the ARPANET, the technological precursor to the Internet.

Tim Schwartz, formerly assistant dean for development at the UCSB College of Engineering (CoE) and executive director of the entrepreneurship program, and now UCSB Senior Director of Development, says that while planning an event honoring Culler in 1996, he learned about nearly a dozen startups launched by the professor’s graduate students and one by Culler himself.

In the early 1990s, UCSB’s former dean of engineering, Venky Narayanamurti (known as “Dean Venky”), was deeply engaged with the COE’s Advisory Committee, made up of local technology CEOs, around the shifting Santa Barbara economic landscape. The community was experiencing a major recession, including a significant decline in the once-robust local defense industry. The Advisory Committee was looking to the College of Engineering to consider its role in training students both to create and fill high wage, clean tech jobs. Venky was particularly drawn to the course in entrepreneurship his fellow Bell Labs transplant Professor John Bowers had started in 1992, partly in response to the same economic scenario the Advisory Committee was considering.

Another reason was that Bowers saw a lot of talented scientists being laid off during the recession. “Around 1992 I started wanting to talk about how you do innovative research to generate new products and make companies successful,” he says. “I thought that it is important to write not just an incredibly good paper, but also an incredibly good patent. That’s what can help a company become commercially successful.”

Eventually, Bowers merged his class with a similar one taught by economics professors Samantha Carrington Crouch, Robert Deacon, and Jon Sonstelle. It was called Economics of Entrepreneurship and Entrepreneurial Engineering, and Bowers remembers it as “the largest class I ever taught. Enrollment was capped at one hundred fifty students, and it was full every time.”