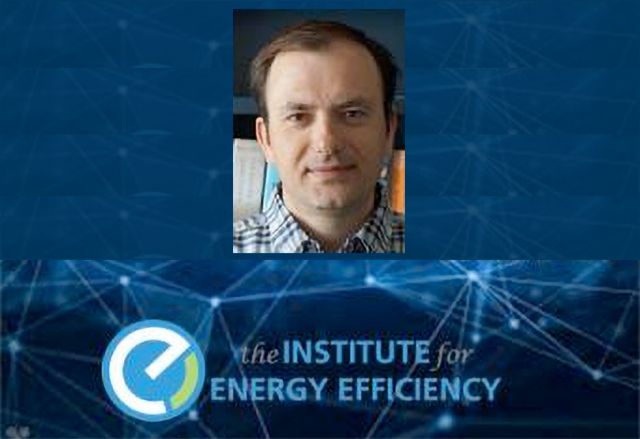 Training artificial intelligence (AI), an activity that involves processing vast amounts of data, is an energy-intensive process. One recent estimate by a researcher at the University of Massachusetts Amherst suggested that training a single AI creates a carbon dioxide (CO2) footprint of 626,000 pounds, or five times the lifetime emissions of the average American car. That same paper asserted that using a state-of-the-art language model for natural language processing equals the CO2 emissions of one human for 30 years. Both findings provide a jarring quantification of AI’s environmental impact, which becomes more troublesome since nearly every industry uses AI and machining learning (ML) to improve decision making and problem solving.

Prof. Dmitri Strukov’s project, “Energy-Efficient Mixed-Signal Neuro-Optimization Hardware,” employs mixed-signal neuromorphic circuits with integrated metal-oxide memristors, which are non-volatile memory devices that his group has been developing for the past ten years. Such circuits enable very dense, fast, and energy-efficient implementation of probabilistic vector-by-matrix multiplier, which is the most common operation in bio-inspired optimization algorithms. The preliminary results from his group show that the proposed hardware implementation is estimated to be 70 times faster and 20,000 times more energy efficient compared to the most efficient conventional approach.

The project received $50,000 in seed funding from the IEE with which Strukov plans to redesign existing circuits and build an interdisciplinary team of people who specialize in algorithms, application domain, and system integration.

The project was among the four awarded inaugural seed funding grants by the IEE. The awards were made possible through a gift from an anonymous donor. The selected projects are in the early stages of development and align with at least one of IEE’s three central themes: computing and communications, smart societal infrastructure, and the food-energy-water nexus. The seed funding is intended to produce preliminary results that UCSB scientists can use to apply for major external funding to further fund and expand their research.