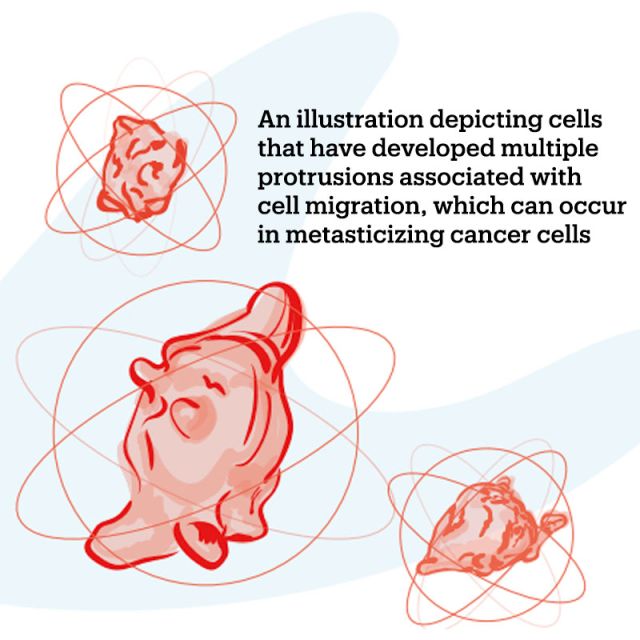 A Collaboration Aimed at Precision — with Professor Denise Montel and PhD student, Allison Gabbert from the Department of Molecular, Cellular and Developmental Biology

MRIs and CT scans have long been valued by the medical community for their ability to convert raw data generated by a scanner into tomography images that reveal the body's internal terrain. These instruments can capture the detail of tissue and bones and the shape of organs; however, other tools are able to generate much more detailed images of cellular activity.

In the past couple of decades, a new technology, 3D live imaging, has expanded the diagnostic toolkit by making it possible to create videos of cell activity. Because it depends on generating and compiling enormous numbers of digital time-lapse images captured from light microscopy, the technology has, like others that rely on very large data sets, benefited from faster and more powerful computers.

But that is not the end of the story. If a picture is worth a thousand words, one might ask, what are the right words to describe a picture, especially one that reveals nuanced changes in such characteristics as the shape, size, and orientation of a cell? While new live 3D imaging technologies generate amazing videos of cellular processes, describing what is shown in those videos remains a challenge.

Nina Miolane, a UC Santa Barbara applied mathematician and an assistant professor in the Electrical and Computer Engineering Department, has developed a new approach, pioneering the field of computational geometric statistics to precisely quantify every nuance of cell activity captured in live 3D images. She has a grant proposal pending to test her methodology further. So far, she has used the software to quantify only static 2D images of cells, and funding would enable her lab to apply the same approach to 3D videos, which Miolane describes as "a much more challenging and realistic setting."

Miolane's work may prove to be of enormous benefit to biologists and medical professionals who require a common, precise language to describe what they see. Geometrical statistics provide that language, the value of which is evident to Allison Gabbert, a sixth-year PhD student in the lab of Denise Montell, a distinguished professor in the Department of Molecular, Cellular and Developmental Biology at UCSB who is working with Miolane. "You can see things under a microscope and describe them subjectively," Gabbert says. "In a gene-expression study, I would knock down or over-express a gene and see that the cells were changing, but I couldn't describe the change precisely. Nina's lab did a different analysis on the images that provided us with a way to quantify what we saw."

Biologists know that cells move by using their cytoskeleton to stretch and retract their membranes in response to mechanical forces both inside and outside the cell, but the exact mechanics of those processes are still not understood.

In one important type of cell migration linked to the metastasis of cancer, a cell creates a protrusion that causes the cell membrane to extend. Sometimes, a cell can produce several protrusions. It will then migrate by extending and retracting the protrusion(s) until it reaches its destination and returns to a non-migratory state, although, Gabbert says, "The specific mechanisms vary depending on the cell type and on whether it is a single cell or group of cells."

Researchers in the Montell lab are studying migratory cells in the ovaries of fruit flies as a model for the migration of cancer cells, which can migrate as single cells, strands of cells, or cell clusters. Some migrate more effectively than others, speeding metastasis. Therefore, Gabbert says, "If cells could be bio-engineered to become less motile [prone to migration], cancer progression could be slowed."

She and Montell discovered that one way to prevent migration of the cells they are studying is to over-express the protein septin, which prevents protrusions from forming. Researchers would like to better understand this cellular process, correlating changes in gene expression with their impacts on protrusion size and shape and the cell's migratory ability. New knowledge in this area could have significant translational application.

Currently, she and Montell are collaborating to use 2D images, generated in Montell's lab, to observe the behavior of migrating cells after septin has been overexpressed or knocked down.

Origins and the Process

Research in the field of geometric statistics began in the 1950s, and several decades ago, code was written for it, but, “It was seldom tested and could not be easily re-used,” Miolane notes. Her lab's important advance, she says, has been "to implement the theory and create open-source code," thereby "democratizing geometric statistics as a class of methods that can be used to automatically quantify shape motions and deformations from images." As of August 2022, the open-source software she wrote for her method had been downloaded more than ninety thousand times since being released in December 2020.

Complicating the step up to video analysis is the fact that generating a live 3D video of a cell requires that hundreds of thousands or even millions of digital light-microscopy images be converted to an outline of the cell comprising every one of the points on the outline of it — generally, about two hundred for a 2D image of a cell and many, many more than that for a 3D image — each of which is represented by its coordinates in 3D space. Miolane's software then provides a precise mathematically quantified representation of the image, making it possible to objectively describe any shape or change.

"Shape analyses performed in biology still require a lot of user input," Miolane explains. "Biologists often look at images individually, processing them using partially automated, partially manual techniques. Such a time-consuming, labor-intensive process is not practical with the enormous number of images required for 3D imaging. If you have only, say, ten images, you can look at them and maybe trace the contour of the cell and then say that in one video, the cell is moving and deforming rapidly and in another video, it is not deforming much. But if you have perhaps a million images, you won't be able to look at them individually and sort them like this. You need a method that can tell you, for example, that all of these half-million cells are deforming faster when they move faster, and all of these other half-million are going slowly and do not deform much. If instead, however, we had a smarter algorithm that could detect geometric changes, then you wouldn't need to manually label anything."

Miolane uses the word geometry to define not dimensions of a feature of cell biology, but rather, in the framework of statistical theory, to indicate what she calls "the geometry of the data space."

"Suppose you wanted to use traditional statistics to compute the mean blood pressure of ten patients," she begins by way of explanation. "You would do that by adding the individual blood pressure of all ten patients and then dividing by ten. Now, suppose that you were to apply that same formula to do a mean average of your patients' heart shapes. You take each patient and use 3D imaging to extract the shape of each of their hearts. Now, you add all the coordinates of the heart surfaces together and divide by ten. But you don't get a nice, neat mean; you get something that doesn't look like a heart at all. The traditional equations don't work here. It's hard even to know what it means to compute the differences between two hearts, or the 'average' heart shape. It requires a brand-new area of statistics."

People realized quickly that using traditional equations for something like averaging heart shapes gives results that are, Miolane says, "so bad that they cannot be used. But then you find tricks around it. So, maybe you can align all of the hearts and then find that this one was too big, so you make it slightly smaller, and you 'account' for the differences. But then you get something that looks like a heart, but what does it really mean? If you do so many computational tricks to arrive at something that looks like a heart, is that really a meaningful 'average' heart? And if the goal is human health, what are you going to tell your patient? 'Your heart looks like the average healthy heart, because after we did a bunch of tricks, it does appear normal?'"

The point, Miolane says, is, "We were lacking the theory to be able to say, 'This is what an average heart actually looks like.' Our work provides that theory, that framework to accurately account for all of the differences that might exist. Applied to cell biology, we will be able to claim: this is how the cancer dynamics of an average cell actually look."

For her methodology, Miolane relied on the same mathematics, developed by Bernard Riemann, that Einstein used to reach his theory of relativity. "Einstein used it to explain gravity. We're using it to explain biology," Miolane says.

The grant she has applied for is intended to fund research that carries some level of risk. The risk in Miolane's work, she says, is, "We don't know for sure whether a finer description of shape dynamics is going to provide more biological knowledge than just saying 'There is a protrusion.' I really think it will, but I can't be one hundred percent certain. We will have to see how medically valuable the 3D images we generate actually are. However, even if we cannot find mechanistic insights on these specific images, the funding would allow us to develop our methods and make them available to the biomedical community as a whole. With datasets of live imaging growing in size, I expect our methods to reveal fundamentally new biology, and I cannot wait to see what the mathematics give us."